The Cigarette by Mick Hunter 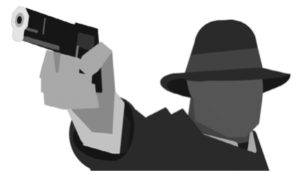 The Cigarette
A Hank Bradshaw Short Story
By Mick Hunter

The gat was sizable enough to put a hole in me, that would be big enough, for me not to like it too much.

“Keep yer hands where I can see’em.”

I shrugged and did what he said.

He was sitting behind a table on his penthouse patio. It seemed that I interrupted his breakfast. We were about ten floors up. The morning view was nice, but I couldn’t concentrate on the view because the idiot was point a small canon at my gut. He waved it a few times towards a chair that was across from him. I got the hint.

He noticed my hands and said, “Those look pretty nasty. What happened?”

Blood was running down the back of my hands, down my wrist and ruining yet another one of my nicer white shirts. Focusing on my hands made them ache. They were already swelling bigger than they already were. They were a rainbow of dark shades. The scabs had been ripped off them many times in the last twelve hours, in which time, I haven’t had a drink.

“Well,” I said, “it’s pretty hard to get a fix on you, so I had to have little conversations with quite of few of your boys.” I saw a bucket of ice, chilling some champagne next to the table. “I’m gonna pour myself a glass.” I eyed the bottle.

His black hair was slicked back tight across the top of his skull. His black eyes seemed so lifeless that it was hard to tell he was even looking at me. He had a huge, fat, bulbous nose and skin so horrible that I could lose my keys in any of his pores. His lips were as fat as his nose and looked chapped. He had one of those pencil thin mustaches that makes you want to lick your thumb and rub it to make sure it’s real. He was dressed in some expensive clothes. At least, I assumed he was. The gold rings and watch gave me that impression.

He poured me a skinny glass of bubbly wine. “Can I reach for it or are you gonna feed it to me in a baby bottle?”

He smiled, but I don’t think it was because he thought I was funny. “Drink it yourself.” He ran his tongue along his teeth and in doing so, it seemed that he was trying to calm himself down. “When you say things like you had ‘little conversations with my boys’, what exactly are you saying?”

I finished the drink in one gulp. I felt a little better, but not by much. “I’m saying that I had talks with them to find out where you were and now you don’t have to talk to them no more.”

“What did you do?” He asked through his teeth.

“And why would I not have to talk to them anymore?”

“Cuz most of them dead.”

He face turned whiter than it already was. He was flushed. Sweat poured down his face. “You lie.” The hand that held the gun, trembled.

“I ain’t lying, pal. I ran out of bullets at the casino and was too lazy to stop and get more. That why my hands look like this. That was a lot of skulls to crack.”

He laughed heartedly at that. “I’m the one with the gun, shamus.”

“Being that as it may, I feel pretty good about my chances.”

“A little booze and you get as giddy as a school girl.”

“I have been told that.”

He smiled. He liked that one. He turned his head toward the penthouse without taking his eyes off of me. “Norman!” he shouted.

I shook my head.

He clenched his jaw. Through his teeth, he shouted, “Pete!”

“No Pete either. It’s just you and me here.”

The shaking of his hand was very visible now. I didn’t know if it was from anger, from fear, or if that damn rod was just too heavy for his weak little arm to hold up. He rested his elbow on the table. With his free hand, he picked up a cigarette. He bit it between his teeth and lit it.

“After this cigarette, Bradshaw, I’m gonna kill you.”

I nodded. “Maybe. I think maybe you could.” The smell of the smoke was sweet in my nostrils. “You mind if I have one last smoke?”

He frowned and shook his head. “Not at all. I’ll put it your mouth and light it. You hold it there. Your hands stay up.”

“You don’t want me to let ash fall on my suit do you?”

“I don’t give a damn about your suit. In a few minutes, you won’t either.”

He leaned over the table and lit me up. I used my tongue to roll the cigarette along my upper lip to the corner of my mouth so that I could still pop wise to him. The eye above the cigarette was squinted and the smoke would build up under the brim of my hat before finally finding it’s way up into the air.

“Your arms getting tired yet?” he asked.

We both exhaled and our smoke collided over the top of the table and shot up like a two waves crashing against each other. He sucking on his pretty fast. He was more than half way through all ready.

“Your time is short, Bradshaw.” His grin became larger after each hit. He took the cigarette and started for the astray to stub it out, wasting about a quarter of it. “I’m going to enjoy this.”

I quickly rolled the cigarette back the front of my mouth. “Me too,” I said as his eyes quickly glanced to the ashtray, and I spit my cigarette at him, hitting him in the face with the cherry.

Before he could even let a scream escape from his mouth, my hands were under the table. I lifted up the table towards him and launched myself out of my chair with as much force as I could. Using the table as s shield, I rushed against him like a defensive tackle on 4th and inches.

We slammed against the the wooden railing with all of my might. I heard the wood snapping and breaking apart. That’s when I lost my balance, and we fell off the patio.

I quickly reached up and grabbed the part of the post that had been nailed to the patio, and gripped that with one of my throbbing hands. I looked down and once the table cleared my view, I saw him falling backwards in slow-motion. His face was filled with terror, but his eyes were locked on me. His arms and legs swung wildly in the air and his gun hand froze once it hand me in it’s sights.

The explosion out of the chamber seemed muffled. It wasn’t until I heard the whiz of the bullet next to my head that the speed of everything went back to normal. My head felt warm. Then, the side of my head felt wet. I knew if I had been shot, I had less than seconds to get back up on the patio.

With everything I had in me, I pulled my heavy, tree trunk of torso up. With my free hand, I grabbed a part of the railing that hadn’t broke. I pulled like I never pulled before. My muscles were ripping at the tendons and they were screaming at me to just let go. Finally, I got myself up and rolled away from the edge to safety and breathed some deep, hard earned breaths.

I heard horns honking and people screaming. I looked over the edge and saw him laying there in a pool of red soup. I sighed.

My hat was laying on the other side of the patio. I picked it up and saw that there was a hole in the left side of the brim.

“That bastard shot my hat!”

I walked into his penthouse and instead of leaving right away, I looked around until I could piece together enough green for a new hat.