How I Got into Zines & the Look of Weird Mask 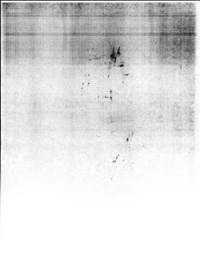 I thought I would spend a little time going over the look of Weird Mask and why it’s important to me.

I first started making zines in the mid 1990’s. There were tons of hardcore, punk and ska shows in the so. cal. area. Every show you went to, there were people there with a backpack full of their zines to sell and small tape recorder in hand so they could interview the bands. Some even had a camera hanging around their neck.

I looked forward to picking up the zines at each show, almost as much as seeing the bands play.

It became a sense of who you were. You were associated with your zine. So, if you had a zine called Dumb BS, and your name was Nick, you were then referred to as Dumb BS Nick. etc.

It was a way for people to get to know you, as well. Your opinions filled the pages with your reviews and

interviews. Your sense of humor was shown through the fake ads you would have to fill a page count. It was blogging before blogging, tweeting before twitter and instagram before… you get the idea.

A lot of times, zinesters would just fill extra pages with pics of their friends or groups shots from shows. Here comes the cringe, some times, even pics of someone they liked, with the rarity of someone actually asking someone out through a page and photo. GULP.

Some of the most fun we would have in making these zines was putting them together.

You would start trying to format the whole thing with scissors and a sharpie. Cutting out photos and art and taping them to your main template sheet. 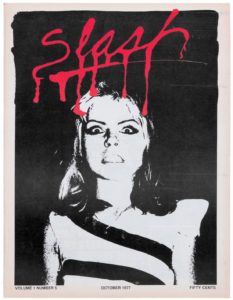 Then you would find someone with a typewriter. Hopefully your interview wasn’t long, because there are eight other people in the room, drinking, and being obnoxious, waiting for their turn at the keys.

Then for some reason, I don’t know why this always happened like this, but around one in the morning, everyone would end up at kinko’s to make their copies.

Checking out what everyone else was doing, led to a lot of last minute changes to up your game.

The copies were around 3-5 cents if I remember correctly. Sometimes, you could not use black ink and use all blue ink or red ink, just to mix it up. We would use their staplers and tape and as soon as we were done, we would head over to Denny’s, which was just a couple blocks away to drink 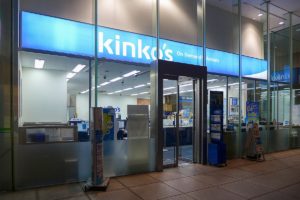 some coffee, and get crackers and ranch for 45 cents. Then, we would trade zines and examine all of our handy work, while making of typos.

The look that I miss most about those times is the high contrast black and white. Most photos wouldn’t show hardly at all. But you squinted your eyes, you would be able to maybe make out a head. But that wasn’t the point, the point was that that moment was captured in a high exposure, high contract, black ink on white paper (mostly) and frozen that way forever. 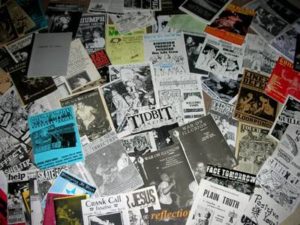 Now, zines are so high quality, you would never know that some were made in people’s living rooms. The photos look perfect, the paper is glossy or nice card stock. But the thing I miss the most is that look of an old Xerox machine, trying so hard to make a picture not look like a rectangle of black ink.

So now, even though I do use software to make Weird Mask, I really try to make the art work inside and the covers, have that high contrast, high exposure look that i loved so much. I hope you like it to. Taking normal photos and trying to make them look like that is thing that takes me longer than anything else in putting these together.

Let me know what you like about zines and when you got started collecting them below.