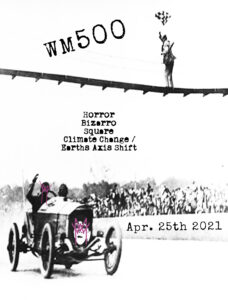 Divorce.  Lockdown.  Loneliness.  As long as he had lived alone, David had no real friends.  Except that now, a largish spider was inhabiting his shower.  It hung out in an upper corner, above and to the right of the shower head.  At first, he was leery of it.  Margaret, when they were still together, would have insisted that he kill it, or would have smashed it herself with a shoe.  Maybe just for Margaret, he left it there in its web in the shower.  Over time, he even began to befriend it.  Or, at least, talk to it.  “Good morning, spider.”  Even then, of course, he kept a close eye on it.  Something about spiders had chilled the bones of humans for a long time.

The spider didn’t seem to like it when he showered for too long.  Maybe it was the heat building up in the bathroom, or the humidity.  It would leave its web a few eight-legged steps at a time.  Looking for an escape?

“No escape,” David would say.  It was something he had learned in his brief foray to college.

But one morning, the spider wasn’t there.  David met that fact with a bit of disappointment, at first, but then equanimity.  He hadn’t particularly liked having a spider in his shower, really.  Now he could shower in peace.  No responsibility to anyone else.  Not even a spider.  A picture of Margaret rose into his mind.  “I hate her,” he said to no one in particular.

Athuna left her web behind.  Her physical web.  She had transcended the need of that collection of sticky fibers.  Pointsquaretesseract.  Her beautiful tangled mass of universal web had completed overnight, reaching its tendrils out to the stars.  Her connection to others of her kind.  More importantly, her connection to the vast dark intelligence.  She was complete.  Or nearly so.

And just in time, too, because the harvest was about to begin.  She felt this new world turning beneath her.  Felt the shift in the axis of this sphere.  The heating of the oceans, the poisoning of the atmosphere, the dimming of the day was about to complete itself in a minute shift of the poles.  At that point:  harvest.  The connection of the ape beings of the planet to the larger universe, to that dark intelligence that even her kind could not name.

David had stepped into the shower, sleep in his eyes.  He didn’t shower very often anymore.  Lockdown.  Loneliness.  He was as likely to sit around in his underwear, drinking beer and smelling himself, as he was to get dressed, get out into the world, maybe try to find a job that wouldn’t be too much of a bother.  Meal delivery, maybe.

But, every third or fourth day, it felt good to get in the shower and rub off the grime of living.  He wondered about that.  Not that long ago, showering was a religious part of his morning routine.  Before coffee, even.  But not any more.

Athuna dwelt in her point in space.  But she wasn’t limited to that point.  She inhabited a point, but she also inhabited a line.  She inhabited a triangle, and a square.  A cube.  Anywhere she put her attention, there she was, out there in the larger universe.

Her assignment was here too.  The ape.  A lonely speck of a being, unknowing of his connections to other ape beings.  And certainly unaware that his universe was about to be extravagantly expanded.

The water was pouring out of the spigot.  She had learned these things from David, unconsciously.  “Water.”  “Spigot.”  “Heat.”  “Steam.”

The steam rose, transcending its own form of water.  Athuna relished the heat, the humidity.  It loosened the joints of this little body she inhabited until the harvest was complete.

And then, suddenly, she felt it.  This planet, this tiny heavenly orb, had clicked into place.  The axis had turned into its own rotational singularity.

David soaped his chest, his crotch.  He raised his arm to soap up his left pit, and suddenly saw that damnable spider, hanging from a thread right in front of him, swaying toward his face.  It was bigger than he remembered, he thought.  Or maybe just closer?  And then, it was on his nose, crawling between his eyes toward his forehead.  David screamed, and pawed at it, but registered that movement only for a second before he realized that in his panic, his feet had slipped beneath him.  He was falling backwards.  And then he saw stars as his head hit the back of the tub.

Athuna quickly settled into the space of the ape being’s third eye.  She would be able to open that up, no sweat.  (“Sweat.”  Another word she had learned from David).  She bit into his forehead, releasing her poisons, then settled into that new space of being.  That new point.  That new line.  Triangle Square Cube. Tesseract.