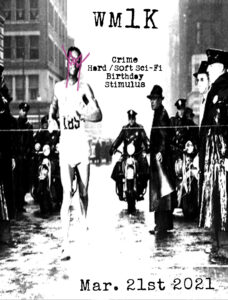 The baying was silenced as soon as the airlock slid into place.  Tara had brought the beagle puppy with her — all four pounds ten ounces of it.  The cute squirming puppy was found on the Ridgemount outpost.  Tara hadn’t even been looking for strays.  She was only on the outpost to pick up supplies and to send a birthday gift to her sister.  And there the furball was lying, nearly lifeless, curled up on top of a trash drone about to be flown off to an incinerator.  If Tara hadn’t gotten lost down a side road she might not have almost collided with the drone and she never would have found the pup.  The thought of it now still made her blood boil.

Usually she left her newly rescued pets at her home base on Merton in sector 10, but her informants had told her of this event two weeks ago and given the distance and pushing her junk heap, Ford-made, 3X Starslinger to top speed she only had just made it on time.

There was a slight hissing coming from the landing hydraulics.  She came in hot.  The planet, a small, what they called marble sized because it slid in the shadows or ‘pockets’ of other larger planets, had a twenty second opening to access it as two larger planets orbited close by.  She had to enter fast.  Luckily, she found a large rock outcropping half a mile from the event camp.  The Starlinger was old and always needing repairs, but it was small and silent and one of the ugliest designs in spacecraft history. It looked like a piece of space shit falling from the sky — rarely given any notice.

She carried a backpack — 20 pounds even with the antigravity assist material.  Twentieth century knives were strapped to her thighs, stun guns on her holster around her waist, and two heat seeking dart guns around her wrists. A large poncho covered the whole outfit.

She hadn’t come to join the festivities, she’d come to end them.  Stun guns and dart guns suggested mercy, but the knives were her backup and she would use them freely if needed.

The sky was void of any light.  Alone with so many lives counting on her.  This was Tara’s private war.

Her rebreather attached over her lower face like a mask, useful in disguising her features.  The rebreather was only good for two hours, but she knew they had replacement packs at these events and gave them out like Trazanian trinkets.  They kept the clients happy and gave them no reason to leave early.

The smell of urine and dog feces hit her nostrils first.  The barking dogs, the yelling — people placing their bets and dog “owners” screaming obscenities as their dogs failed to earn them their fortunes created a pressure chamber.   Lots of intergalactic coins and credit being exchanged.  All illegal, but the intergalactic police almost never went after the dog fighting rings as long as they did it “out of the way”.  Too many other “real” crimes to deal with to be bothered by what they deemed harmless fun.

The center arena was surrounded by people cheering and waving betting tickets.  Sixty people from about five different planetary races.  Most, she cringed to see, were human — her own race.  Stereotypes — hicks who glorified old Earth customs claiming dog fights were part of a great old world culture and how humans would lose their identities if the dog fights were abandoned and forgotten.  Some also claimed the dog fights stimulated economy, kept the old traditional dog breeds from going extinct, or — Tara’s favorite justification — dog fights were good for the dogs by keeping the population down.

Tara made her way around back. She stashed her backpack.  Stepping back, her foot slipped on what she thought was mud or whatever this planet’s soil was, but when she shined her wrist light down she saw a small pool of blood.  The blood came from a Pittbull, genetically enhanced to have oversized jaw muscles.  Disemboweled, eyes glassy and fixed — it probably won its match, but they couldn’t get it to disengage and killed it.

Her resolve rose — it was time.

She secretly planted her specialized bombs around the event camp.  Avoiding direct line of cameras and the suspicion of the private security androids that constantly scanned the crowd for behavioral anomalies was by far the most difficult.

Getting close enough to the dogs and other animals so she could inoculate them with her special formula wasn’t nearly so difficult.  She wore a  necklace made of Ghulandrian Velmer under her poncho.  A trinket from a lifetime ago.  She lowered the neckline of her poncho flashing perspective owners the rare and expensive metal — a signal— her interest in their animal could be followed up with actual intergalactic coin. They were very happy to let her privately observe the animals.

The matches never stopped in the arena and every second felt like an eternity to Tara.

Finally, all animals innoculated, she relocated her backpack, pulled out the energy blocking emitter, hit the discharge button and watched as the cameras, security androids, animal pen locking devices, and communicators shut down.  A loud cry went up from the betting hoard as Tara thought of them, but before they could act she hit the detonation button on her stun bombs (her specialty where an extremely painful shockwave released and caused anything or anyone who hadn’t received her inoculation to fall unconscious, but not before shitting themselves. An unexpected side affect that pleased Tara).

Tara stood and panned the event camp with her wrist light — reflections of dozens of eyes caught the light.  Some were barking, some growling and baring their teeth, others were whimpering.  And some she knew she had been too late to save.

There was still lots to do. She bent down, picked up a shaking mixed breed with open sores, too weak to move.  It’s heart beat under her hand as she held him — victory.