Tarzan of the Apes Chapter 15 by Edgar Rice Burroughs 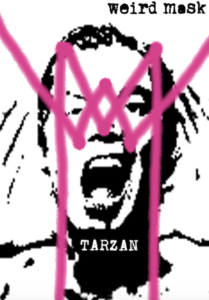 WHEN Clayton heard the report of the fire-arm he fell into an agony of fear and apprehension. He knew that one of the sailors might be the author of it; but the fact that he had left the revolver with Jane Porter, together with the overwrought condition of his nerves, made him morbidly positive that she was threatened with some great danger; perhaps even now attempting to defend herself against some savage man or beast.

What were the thoughts of his strange captor or guide Clayton could only vaguely conjecture; but that he had heard the shot, and was in some manner effected by it was quite evident, for he quickened his pace so appreciably that Clayton, stumbling blindly in his wake, was down a dozen times in as many minutes in a vain effort to keep pace with him, and soon was left hopelessly behind.

Fearing that he would again be irretrievably lost, he called aloud to the wild man ahead of him, and in a moment had the satisfaction, of seeing him drop lightly to his side from the branches above.

For a moment Tarzan looked at the young man closely, as though undecided as to just what was best to do; then, stooping down before Clayton, he motioned him to grasp him about the neck, and, with the white man upon his back, Tarzan took to the trees.

The next few minutes were such as the young Englishman never forgot. High into bending and swaying branches he was borne with what seemed to him incredible swiftness, while Tarzan chafed at the slowness of his progress.

From one lofty branch the agile creature swung with Clayton through a dizzy arc to a neighboring tree; then for a hundred yards maybe the sure feet threaded a maze of interwoven limbs, balancing like a tightrope walker high above the black depths of verdure beneath.

From the first sensation of chilling fear Clayton passed to one of keen admiration and envy of those giant muscles and that wondrous instinct or knowledge which guided this forest god through the inky blackness of the night as easily and safely as Clayton could have strolled a London street at high noon.

Occasionally they would enter a spot where the foliage above was less dense, and the bright rays of the moon lit up before Clayton’s wondering eyes the strange path they were traversing.

At such times the man fairly caught his breath at sight of the horrid depths below them, for Tarzan took the easiest way, which often led over a hundred feet above the earth.

And yet with all his seeming speed, Tarzan was in reality feeling his way with comparative slowness, searching constantly for limbs of adequate strength for the maintenance of this double weight.

Presently they came to the clearing before the beach. Tarzan’s quick ears had heard the strange sounds of Sabor’s efforts to force her way through the lattice, and it seemed to Clayton that they dropped a straight hundred feet to earth, so quickly did Tarzan descend. Yet when they struck the ground it was with scarce a jar; and as Clayton released his hold on the ape-man he saw him dart like a squirrel for the opposite side of the cabin.

The Englishman sprang quickly after him just in time to see the hind quarters of some huge animal about to disappear through the window of the cabin.

As Jane Porter opened her eyes to a realization of the again imminent peril which threatened her, her brave young heart gave up at last its final vestige of hope, and she turned to grope for the fallen weapon that she might mete to herself a merciful death ere the cruel fangs tore into her fair flesh.

The lioness was almost through the opening before Jane found the weapon, and she raised it quickly to her temple to shut out forever the hideous jaws gaping for their prey.

An instant she hesitated, to breathe a short and silent prayer to her Maker, and as she did so her eyes fell upon her poor Esmeralda lying inert, but alive, beside the cupboard.

How could she leave the poor, faithful thing to those merciless, yellow fangs? No, she must use one cartridge on the senseless woman ere she turned the cold muzzle toward herself again.

How she shrank from the ordeal! But it had been cruelty a thousand times less justifiable to have left the loving black woman who had reared her from infancy with all a mother’s care and solicitude, to regain consciousness beneath the rending claws of the great cat.

Quickly Jane Porter sprang to her feet and ran to the side of the black. She pressed the muzzle of the revolver tight against that devoted heart, closed her eyes, and—

The girl, startled, pulled the trigger and turned to face the beast, and with the same movement raised the weapon against her own temple.

She did not fire a second time, for to her surprise she saw the huge animal being slowly drawn back through the window, and in the moonlight beyond she saw the heads and shoulders of two men.

As Clayton rounded the corner of the cabin to behold the animal disappearing within, it was also to see the ape-man seize the long tail in both hands, and, bracing himself with his feet against the side of the cabin, throw all his mighty strength into the effort to draw the beast out of the interior.

Clayton was quick to lend a hand, but the ape-man jabbered to him in a commanding and peremptory tone something which Clayton knew to be orders, though he could not understand them.

At last, under their combined efforts, the great body commenced to appear farther and farther without the window, and then there came to Clayton’s mind a dawning conception of the rash bravery of his companion’s act.

For a naked man to drag a shrieking, clawing man-eater forth from a window by the tail to save a strange white girl, was indeed the last word in heroism.

In so far as Clayton was concerned it was a very different matter, since the girl was not only of his own kind and race, but was the one woman in all the world whom he loved.

Though he knew that the lioness would make short work of both of them, he pulled with a will to keep it from Jane Porter. And then he recalled the battle between this man and the great, black-maned lion which he had witnessed a short time before, and he commenced to feel more assurance.

Tarzan was still issuing orders which Clayton could not understand.

He was trying to tell the stupid white man to plunge his poisoned arrows into Sabor’s back and sides, and to reach the savage heart with the long, thin hunting knife that hung at Tarzan’s hip; but the man would not understand, and Tarzan did not dare release his hold to do the things himself, for he knew that the puny white man never could hold mighty Sabor alone, for an instant.

Slowly the lioness was emerging from the window. At last her shoulders were out.

And then Clayton saw a thing done which not even the eternal heavens had ever seen before. Tarzan, racking his brains for some means to cope single-handed with the infuriated beast, had suddenly recalled his battle with Terkoz; and as the great shoulders came clear of the window, so that the lioness hung upon the sill only by her fore-paws, Tarzan suddenly released his hold upon the brute.

With the quickness of a striking rattler he launched himself full upon Sabor’s back, his strong young arms seeking and gaining a full-Nelson upon the beast, as he had learned it that other day during his bloody, wrestling victory over Terkoz.

With a shriek the lioness turned completely over upon her back, falling full upon her enemy; but the black-haired giant only closed tighter his hold.

Pawing and tearing at earth and air, Sabor rolled and threw herself this way and that in an effort to dislodge this strange antagonist; but ever tighter and tighter drew the iron bands that were forcing her head lower and lower upon her tawny breast.

Higher crept the steel forearms of the ape-man about the back of Sabor’s neck. Weaker and weaker became the lioness’s efforts.

At last Clayton saw the immense muscles of Tarzan’s shoulders and biceps leap into corded knots beneath the silver moonlight. There was a long sustained and supreme effort on the ape-man’s part—and the vertebrae of Saber’s neck parted with a sharp snap.

In an instant Tarzan was upon his feet, and for the second time that day Clayton heard the bull ape’s savage roar of victory. Then he heard Jane Porter’s agonized cry:

Running quickly to the cabin door, Clayton called out that all was right, and bade her open. As quickly as she could she raised the great bar and fairly dragged Clayton within.

“What was that awful noise?” she whispered, shrinking close to him.

“It was the cry of the kill from the throat of the man who has just saved your life, Miss Porter. Wait, I will fetch him that you may thank him.”

The frightened girl would not be left alone, so she accompanied Clayton to the side of the cabin where lay the dead body of the lioness.

Tarzan of the Apes was gone.

Clayton called several times, but there was no reply, and so the two returned to the greater safety of the interior.

“What a frightful sound!” cried Jane Porter, “I shudder at the mere thought of it. Do not tell me that human throat voiced that hideous and fearsome shriek.”

“But it did, Miss Porter,” replied Clayton; “or at least if not a human throat that of a forest god.”

And then he told her of his experiences with this strange creature—of how twice the wild man had saved his life—of the wondrous strength, and agility, and bravery—of the brown skin and the handsome face.

“I cannot make it out at all,” he concluded. “At first I thought he might be Tarzan of the Apes; but he neither speaks nor understands English, so that theory is untenable.”

“Well, whatever he may be,” cried the girl, “we owe him our lives, and may God bless him and keep him in safety in his wild and savage jungle!”

The two turned to see Esmeralda sitting upright upon the floor, her great eyes rolling from side to side as though she could not believe their testimony as to her whereabouts.

The lioness’s shriek, as Jane Porter had been about to put a bullet into poor Esmeralda, had saved the black’s life, for the little start the girl gave had turned the muzzle of the revolver to one side, and the bullet had passed harmlessly into the floor.

And now, for Jane Porter, the reaction came, and she threw herself upon the bench, screaming with hysterical laughter.