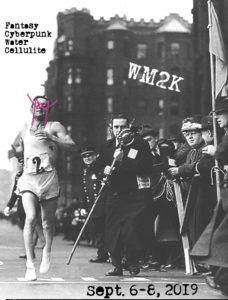 As Rachel woke up she found the left side of her face in about two inches of water. The pain in her head was throbbing . She coughed and the throbbing turned to pounding. She winced as she tried to reach her head with her hand, but quickly realized that her hands were tied behind her back. This made her mentally scan the rest of her body. She was on her knees, hunched over with her face in water. Her ankles were tied together as well. She attempted to thrust herself upwards in hoping to land on her feet, but only moved a couple inches before the back of her head hit the metal grate above her.

She began to feel pain in other parts of her body. Her her stomach felt as if she had been stabbed multiple times. Her hips and thighs felt the same way. She lifted her head up as much as she could and tried to see through the darkness to figure out where she was.

She slowed her breathing. She closed her eyes tightly and focused on what sounds she could hear. All she heard were faint moans, grunts and gulps. She wanted to cry. She could feel the tears welling up inside her. But, she knew if she didn’t get out of there fast, there would be plenty of time for feeling sorry for herself.

All she needed to do was find out where she was and what was happening to her. If she could figure that out, she may be able to escape…

“Who said that?” Rachel said, bumbling around in pain trying to find the keeper of the voice.

“I’m right next to you. To your right,” the voice said.

Rachel turned her head to her right and squinted into the darkness. She couldn’t see anything.

“Close your eyes for a moment, and when you open them, don’t look toward the blue lights. Keep your head tilted down to your shoulder and your eyes with adjust,” the voice said.

Rachel did what the voice said. When she opened her eyes again, she gasped at what she saw. There was a woman, tied down just like herself, in a cage. With a tubes coming out of many parts of her body. She looked horrible.

“Of course. It’s what they do to everyone.”

“Why? What is this place?” Rachel asked.

“Cellulite farm. They suck out our fat and use it for various things. There is even a tube in your stomach for them to put it back into you.”

Rachel shouted in terror, “Why?”

“Shhh. Keep your voice down. You don’t want them coming over here.” The woman swallowed. “They feed it to us because it’s just fat. It makes us fatter. We are like human veal.”

“You don’t have to. It’s the situation we’re in. That’s it.” The woman put her face down in the water and took a drink. “You with the rebellion?”

Rachel hesitated. She wasn’t used to people talking so freely. “I am.”

“Fuck the Dragons!” The woman shouted. She tried to spit at her as well but didn’t have the strength and it just ran down her chin. “I’m with the Wizards.”

“What do you mean, so? Besides the Bots, The Dragons are our mortal enemies!”

Rachel finally understood. She asked in a calm and caring voice, “How long have you been here?”

“What’s it to you, Dragon trash?” the woman spat.

“All the factions made peace with one another to fight the real enemy, The Bots.”

The woman was in disbelief. “When?”

“Over two years ago,” Rachel said, with sadness in her voice, knowing what that meant.

Tears ran down the woman’s cheeks. “So, I’ve been locked here in this cage for over…two years…”

Rachel thought she heard to woman sobbing, but couldn’t tell. She thought to herself for moment. She had never heard of a room like this. If the woman next to had been there since before the faction treaty, it was a good assumption to figure that no one had ever escaped from a place like this.

The woman cleared her throat and asked, “How’s the war going out there?”

Rachel tried to give her a reassuring grin, “It’s going. You win some you lose some, I guess.”

“Not good then.” The woman sighed and said, “That fucking sucks.”

“Well then I better give you the run down. Before you ask, no one has ever broken out of here. The only way you get out of here is if your dead or not producing. Judging by screams I’ve heard, It’s better to go get dragged out of here dead.” The woman coughed and tilted her head down again to get another drink of water. “Because you still have muscle, your arms and legs will cramp up to the point where you will think that you can’t take the pain anymore. But you will. We all did. It won’t kill you, but you’ll wish you were dead.”

Rachel thought about that for a moment. She thought about what would happen if she would be able to free all the women there. She could open their cages, but their muscles would probably be all decayed to nothing. They wouldn’t be able to walk themselves out of there, let alone make a run for it. It wasn’t a reassuring thought by any means. She thought it wise to change the subject and quickly. “Where are we?”

“I don’t know. Some dark ass hole in the middle of nowhere. Let me guess. You were hanging out, got tired, fell asleep and then woke up here?”

“Exactly. I was at… oh no! I was at the safe house. There were at least ten other soldiers there!”

“They’re all dead. The Bots have no use for men. I heard they freeze their sperm and that there is a baby farm somewhere else. I would much rather be shitting out kids then getting my fat sucked out of me.”

Both of them had a brief moment of silence, letting that really sink in. Then, Rachel spoke up, “I’m sure they don’t let you keep the kids. Consider yourself lucky.”

“Fair point,” the woman said, then turned her head and whispered, “Shh…”

The clanking of metal footsteps grew closer. Rachel pretended to still be asleep but tried to see, through squinted eyes, what was coming towards her. The blue lights over head reflected off of metal legs. It was indeed a Bot, it was holding something, long and metallic, and it was heading right for her.

It stopped in front of her cage, just inches from her face. She could smell the lubricant in it’s joints. She wanted to vomit all over it’s feet. She didn’t have time to. She felt the long, metal rod placed against the base of her skull…

A jolt of electric pain shot through Rachel’s body and she involuntarily jumped up, slamming herself against the top of the cage before falling back into the puddle at the bottom. She heard a noise that she couldn’t make it out. Her eyes were drawn to a viscous white fluid running up a tube; not away from her, but towards her! She felt it as it filled her stomach. She felt as if she was full but it kept coming. She was certain that her torso was about to rip apart. Just as she thought she could take no more, it stopped. The pain didn’t but the fluid did.

The Bot walked away.

The woman next to Rachel whispered, “You can puke that crap up if you want, but if you do, they will just fill you up with more.”

“What was it?” Rachel said, coughing.

“Cellulite. I told you that already.”

“I can’t believe that bag of bolts shocked me with a damn cattle prod!” Rachel began breathing heavily. She clenched her jaw. Her eyes blazed red with fire. She snorted and small smoke rings came out of her nostrils.

The woman’s eyes next to her grew large. “What the fuck…”

“I just needed to know,” Rachel grunted. “I needed to see with my own eyes what these savage, wired filled, robots did with the people they took! We slipped the intel to them. We told them where we would be. We knew they were gassing us. We knew it was them that made us fall asleep. We knew… I can’t believe they killed the men… These rusty assholes won’t hurt anyone ever again…”

The woman next to her couldn’t believe her eyes. Rachel screamed as her bones popped and snapped. Even in the darkness the woman could see that Rachel’s skin was turning red. She could tell that her limbs were growing.

Rachel screamed as the ties around her wrist were obliterated with the sudden growing girth. Her hands fell down beside her in the shallow puddle and within moments, she was able to push herself  upwards, her back pressed firmly against the top of the cage.

The bindings on her ankles were the next to go. She pulled her knees close to her chest, her feet planted on the ground. She ripped the tubes out of her stomach, hips and thighs. Her screams were loud enough now that everyone, human and bot alike, could hear.

An army of hurried metal footsteps filled the air. They circled around the cage. One of them began to blast her with the cattle prod, over and over again. Her screams turned into roars.

The woman in the cage next to her, was having a hard time seeing through the legs of the bots, but she saw with clarity, the enormous red wings of the dragon when they shot up in the air from Rachel’s cage. A loud shriek echoed through the vast room. The sound of metal bending unnaturally soon followed.

That was the first time, the woman in the cage next to Rachel, ever saw a real life, honest to God, dragon! A smile graced her lips for the first time in years.

A huge, hot flame shot out of the red dragon’s mouth, melting the bots on contact, down to a pool of what looked like mercury. It’s wings flapped loudly as it rose off the ground and into the air. It soared around the round domed room, breathing fire onto the central control hub. Sparks, explosions, screams, cries all could be heard at once.

The dragon looked up to the ceiling and after taking a deep breath, spit forth another melting blow of flame and blew out the ceiling of the dome, flapped it’s wings and flew out of the enormous hole that it made.

The woman in the cage next to what had been Rachel’s cage, could still hear the dragon scream, breathe flames and cause destruction to many other structures nearby. She laughed. She knew that this had to be the end of the war. It had to be, right?