A Twisted Consumption by B. L. Koller WM1K Submission 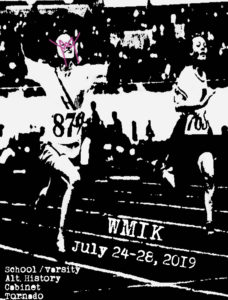 The weather was much too dreary to continue to wander the streets. In a way it was to his benefit for Edgar couldn’t bare the thought of his wife seeing him in such an unsightly state. Still, he walked onward until he found a school. The rain thudded against the roof, as the wind threatened to tear away the shingles on the roof. Such a place seemed dreary without the students and absent teacher. He wandered over to the teachers desk, hoping that it might hold some spare ink. Surely a teacher would not mind sparing some ink. They would understand, he mused. For teachers have a certain fondness of the written word by nature. Had the sir or madam been there, wouldn’t it seem likely that they would offer? To Edgar’s dismay, he found none. However, off towards the left hidden away in a corner was a cabinet.

“Aha. It must be in there.” The wood smelled of maple, and it was fair to assume that this was a newer addition to the classroom. It seemed almost untouched with the exception of a single fingerprint on the door. A careless student, perhaps? With a shake of his head, Edgar pulled open the door. He smiled a bit at this small victory. A few spare inkwells had been stored within, and he took one before seating himself at a desk nearby, and took a notebook from his jacket pocket, and began to write.

My beloved Virginia’s piano playing had been so rudely interrupted by a cough.  She turned her gaze upon me. I smiled and shoved the soiled handkerchief into my pocket. There was not yet any reason to alarm her. For this illness seemed inescapable. So often had consumption plagued my loved ones that I knew it was only a matter of time before one of us contracted the vile sickness. I’d hoped that I’d be around and healthy for quite a bit longer. In any case, I had yet to find myself bedridden, as was so common with this particular affliction.

“Tis but a cough, Sissy. Nothing more.”

“Eddy” She said in such a hushed tone I pondered if I’d imagined it. Then I followed that innocent gaze of hers to find that my handkerchief had fallen to the floor. The blood was too fresh to pass off as nothing but an old stain. Virginia rose to pick it up, but I raised my hands.

“Don’t touch it.” My tone was stern enough to only warn, not intended to threaten, but still she’d lept back. “Forgive me,” I whispered kneeling to pick up the cursed cloth.

“How long has the consumption been with you?” Virginia ignored my warning, and placed a gentle hand on my cheek.

“This is the first time.” I couldn’t lie to those angelic eyes. If I did, it would only prove to worry her further.  She settled on me a moment longer before returning her attention back to the music.  We didn’t discuss it again.

The coughs only persisted. With each week getting progressively worse. Until I had no choice but to hide myself away. It’s better she didn’t see this.

Edgar placed his pen down and stared out the window. The winds picked up with much more force. A shutter came unhinged from its home. Glass shattered. Debris went flying, raising the dust from the floor.

Edgar stared down at the page smeared with ink and blood. A persistent pain rattled his skull, and then in a moment, his feet no longer touched the ground. Winds spun the room round. It ripped the pages from his book. He reached out to fetch them, but he was so dizzy he couldn’t tell his right from his left. Until a light flashed before him. Thunder and rain poured onto him, staining the pages, and soaking his clothes.

Was all this effort for nought? Another flash of light, and a strange tingling sensation throughout his body. Burning one moment, and then the next Edgar felt nothing. Saw nothing. Only a white, silent world. He stood, gazing at the vast white nothingness. A light so bright he thought he’d heard something in the distance, but he didn’t have the strength to move.

“If it’s important,” he reassured himself. They would come knocking.

Black feathers cascaded, and swirled in a tunnel around him before it finally took shape. Edgar sat up in a daze at the strange sight before him. The pain in his head had stopped, as had the burning in his lungs, and the persistent taste of blood.

“I’m dead.” He said allowed to himself. The black feathered bird hopped towards him, and then looked somewhere beyond. Perhaps even past the mortal realm. It flapped suddenly, once again disappearing in a mass f swirling feathers and unholy, otherworldly caws. Distant, yet close.

Was this what death was? The mind playing tricks on you until the world faded into darkness.

He felt for his notebook, hoping that on the chance that he hadn’t driven himself mad with fever he could record such a strange creature. As it spun round and round at speeds the human mind couldn’t possibly comprehend.

The raven returned. With his notebook clenched in a clawed, scaly foot. Somehow, Edgar felt compelled to follow it. Where would t lead him? Would his beloved wife know of is passing? Had he even bothered to leave a note. Thes were the wretched things he couldn’t remember. If only the world would stop this relentless spinning!

Edgars back hit something hard. It sent spasms up his entire body. His eyes finally came to rest on the wretched beast. It too, was covered in blood as his body sputtered out of control before everything went cold. A snap.

Edgar watched, helplessly as what little remained of his beloved notebook washed down the river, carrying away is final pages that reeked of blood and stale ink.