This is the first part of a 26 part monthly serial.

If you like Twin Peaks, YOU WILL LOVE BLACK STAR CANYON!

Here are the first two chapters to give you a taste 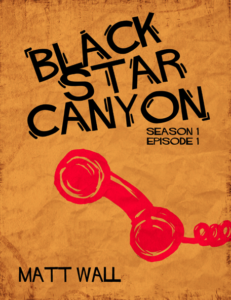 This was where our story started. The small domino that was pushed over, causing a series of events that were to unfold, that would utterly destroy the good people of Black Star Canyon. That one, little, seemingly insignificant event, would create a ripple effect so large, so uncontrollable, that nothing would be able to stop it. The townspeople of Black Star Canyon would try to think back on what it was that solidified their doom, but the problem was, no one would actually know about this one, little, seemingly insignificant event; no one but one person. That one person, made a choice just minutes before that event. It didn’t take the person long to do. They sat. They thought. Then…

The living room in the home was nice. Nice in a way that everything in the room would have been top of the line when it was purchased, but that was obviously a very long time ago. Sitting there in a chair; a nice comfy chair, though full of dust embedded into the fabric, was an old man. The old man was wearing long pants, layered socks, and thick slippers. The top half of the old man was layered with different shirts and topped with a thick, knitted, sweater whose sleeves were a bit too long, so the old man had them rolled up into giant puffs around his wrists. He sat there, like he did every evening, reading the newspaper. He would slowly go over each article, word by word, squinting his eyes every so often, then tilting his head back to look down his nose through his bifocals to make sure he was reading what he was reading. He would mouth things like, “What the…” and, “Oh, Hell…” without making a sound as he was either horrified by the state of the world or just disgusted with where it was going.

The phone that sat next to him on the small table and then screamed at him. “RIIIIIIINGGGGGGG!” said the phone.

The old man sighed. He tried to wet his mouth and his lips by licking them with his dry tongue. The more he tried, the more saliva built up in his mouth.

“RIIIIINGGGGGGGGG!” The phone said again echoing through the hollow home.

The old man seemed frustrated. He looked over at the phone as if giving it the “stink eye” would shut it up. He licked his lips again.

“RIIIIIIIINNGGGGGGGG!” The phone seemed to be getting angry.

The old man slowly moved his woolen wrist over to the telephone. He picked it up in mid-ring. “Hello?” He said it so quietly, that almost he, himself, didn’t hear it. He pulled the phone away from his head. He licked his lips again, moistening his mouth. In a very normal tone he spoke, “It’s for you.” There was silence. The crinkling of his newspaper broke the quiet. Again he tried, “It’s for you.”

A voice from upstairs that was filled with glee yelled back, “Is that for me?” followed by what sounded like a stampede coming down the hard wood staircase.

“Yes. It’s for you,” the old man said quietly as he held the phone up and she grabbed it out of his hand.

The girl, I should say woman; she looked to be in that gray area, had shoulder length, blonde hair, tiny little shorts and a pink t-shirt that was cut off to expose her tight stomach. When she grabbed the phone from him and ran around the corner into the kitchen, the spiral phone cord stretched around it after her. Each loop along the corner made a loud “CLACK” sound. The “CLACK” repeated in quick succession until she felt comfortable with where she was in relation to the old man, due to the privacy of the call and the ability of the old man’s hearing.

“Hello?” she said. She smiled a huge smile, bit her thumb nail, and turned red as an apple. “No. No one can hear.”

And that was true. No one outside of that call could hear what went on during the short conversation. The problem was, was that the only people who would benefit from knowing who was on the other end of that call, the good people of Black Star Canyon, would never, ever, find out who that was.

Jonathan Kensington left his rustic, slightly secluded home, with a smile on his face. He looked down at Prince Harry, his Yorkshire Terrier, who by the way, was wearing a green and red sweater that just so coincidently matched Jonathan’s green and red scarf. Jonathan said, “Let’s go for that morning walk ‘ol chap!”

The funny thing about Jonathan is that he spoke in a proper British English accent, yet Jonathan had never been to England, nor were his

parent’s from there. Nobody in Black Star Canyon knew this though. Jonathan just loved watching shows on BBC and thought that it made him sound fancier, which it did, and he also thought that people in town would find him more charming, which they also did.

Jonathan whistled while he and Prince Harry walked along the side of the road near the woods and the mouth of the canyon. “Do your business, Harry,” Jonathan said while rubbing his hands together to keep warm. His hands were clad in brown leather driving gloves. He also had on a big, gray coat and matching fedora. Another funny thing, was that it really wasn’t even chilly. This was just the look that Jonathan liked to have. In fact, Prince Harry was panting up a storm and they hadn’t even walked more than a couple hundred feet.

Harry did his business. “Aren’t you a clever little lad?” Jonathan said while walking away from the pile of dog excrement left off the road. Jonathan never picked up after his dog. He figured he didn’t have to since it was all open land and none of the other neighbors ever came through that part of the road. There were two other houses within eyesight from Jonathan’s. One was an old, dilapidated little shack down the road a bit and the other was a nicer, much bigger home, on the road above Jonathan’s. The couple that lived there were old and never really came out to socialize. Jonathan was always jealous of them though, because even though they were all living in the woods, this couple still managed to have a lustrous front yard with a well-manicured lawn and beautiful flower beds, like one you would see on the cover of some magazine.

Their walk continued, like it did every morning, with nothing more unusual than any other morning. “What a beautiful day, chap!” Jonathan said with glee through a stupid smile. He would often wish that the people of Black Star Canyon could see him in the mornings, walking and smiling and whistling. Jonathan always thought that if people did see him like this, they would think or say things like, “Wow! Look at him go!” or “I do believe that is the happiest person in all of Black Star Canyon!” In these fantasies, he would also pretend that he hadn’t heard them and just go about his morning as usual but be smiling on the inside that they noticed.

Prince Harry suddenly grabbed the scent of something and walked faster. Jonathan’s arm extended as Harry pulled harder on the leash. Harry started kicking up tiny rocks and dust onto Jonathan’s nice leather loafers. “Harry, you must calm yourself, right away,” Jonathan said sternly. “You will make us both a mess.”

And that’s when he saw her. Well, that’s when he saw her bare, naked ass, looking him right in the face. She was bent over a large rock, next to the dead trunk of a tree that had fallen over many years ago. Her legs were bruised and bloody. Her limbs seemed to be stiff and placed oddly, somewhat defying gravity. There was a large pool of muddy blood under where her feet hung.

Jonathan, being the gentleman that he was, tried to cover his mouth before the vomit exited the orifice, but the attempt was in vain as yellowy chunks and liquid projected out of his mouth through the fingers of his expensive, brown, leather driving gloves. “Bloody hell!” Jonathan tried to cry out in place of the vomit, but it just gurgled out. In the excitement of the moment, he dropped Prince Harry’s leash and Harry ran over to the girl, growling the whole way, sniffed her feet and licked them. This made Jonathan vomit again, through his disgusting, brown, leather driving gloves. Harry looked back at Jonathan with a look that said, “What a pussy,” before sniffing the pool of muddy blood and lapping it up.

“No Harry!” Jonathan yelled again through the third round of losing last night’s dinner through his fancy gloves. Harry didn’t even respond. Jonathan’s nice scarf was now also covered in bile and chunks of unidentifiable edibles.