#Yellotober – The King in Yellow: The Repairer of Reputations Part 2

The King in Yellow
The Repairer of Reputations Part 2
By Robert W. Chambers

“THE IMPERIAL DYNASTY OF AMERICA.”

“Do you know what a Repairer of Reputations can be?”
“I do,” I replied, suppressing the rage within.
“Oh,” he said again.
Louis and Constance came strolling by and stopped to ask if we would join them. Hawberk looked at his watch. At the same moment a puff of smoke shot from the casemates of Castle William, and the boom of the sunset gun rolled across the water and was re-echoed from the Highlands opposite. The flag came running down from the flag-pole, the bugles sounded on the white decks of the warships, and the first electric light sparkled out from the Jersey shore.
As I turned into the city with Hawberk I heard Constance murmur something to Louis which I did not understand; but Louis whispered “My darling,” in reply; and again, walking ahead with Hawberk through the square I heard a murmur of “sweetheart,” and “my own Constance,” and I knew the time had nearly arrived when I should speak of important matters with my cousin Louis.

Check back tomorrow for the last part of The Repairer of Reputations! 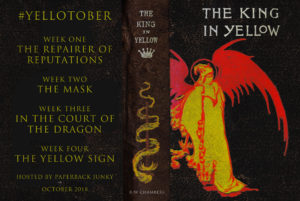