Where I Keep My Spoons by Ben Fitts

Where I Keep My Spoons was published in the first issue of Weird Mask back in June. You can find out more about Ben Fitts and his work here.

Where I Keep My Spoons
by Ben Fitts

“Mommy, Daddy! There’s a house in sky!” shouted Trudie as she burst into the kitchen through
the back door.

“Sorry, sweetie. There’s a what?” asked her father gently as he lowered the kitchen knife he had been slicing tomatoes with.

“A house! Come outside and look, it’s flying up in the sky!”

“Oh, really?” he asked without looking up. He had learned enough over his six years of parenting to know that indulging his daughter tended to make her calm down faster.

“Cccommmmeee oooonnnn! When have you ever seen something like this before!”

Her father sighed and put down the knife, still bloody with tomato innards. “Ok, Trud. Let’s

“What, dear?” asked her mother, lowering the paperback she had been reading in the connected living room.

“You have to go outside with me and Daddy to see to house in the sky!” Trudie explained.

Her father gave her mother a warm but resigned smile. “You heard the girl, Hope.”

Triumphantly, Trudie stamped out the back door and into the yard, her parents trailing at her heels. “See, there it is. A house in the sky!”

And there it was. A small one story tudor home, floating in the sky.

The house sat on a patch of cement ground, also floating. A doormat and some flower pots decorated the entranceway, perched on outskirts of the cement. It was the kind of house that Trudie’s mother would call “cute” if they drove past it and if it wasn’t floating a good fifty feet in the sky.

Trudie looked back at her parents proudly. They exchanged the amused, smiling look they always did around Trudie’s childish antics.

When the two adults looked into the sky, they saw exactly what they had been expecting: an empty Massachusetts sky on an autumn afternoon.

Satisfied, Trudie stomped back inside the house.

“Isn’t she getting a little old for this, Stuart?” asked her mother, once was Trudie was back inside. Her father shrugged.

“She’s only a couple months into the first grade, this is still normal. Anyway, I’m sure she’s just pretending,” he added, rubbing his wife’s shoulder. “She knows there isn’t really a house in the sky. It’s just a game she’s playing.”

Trudie’s mother nodded. She wanted to believe her husband. She really did.

Trudie couldn’t fall asleep that night, and stayed awake under her covers long after her parents went to bed. She too excited about the house in the sky.

She could see it from her bedroom window. She watched in fascination as it hung in place, perfectly still. She wondered how the house had gotten up there in the first place, and if it was going to come down at some point.

She wondered if her friend Timmy who lived down the street could see house also. She would have to ask him about it on the bus school the next morning. He was two years older than her and in the third grade, so she wouldn’t see him during the day.

Then something in the house moved.

Its front door fell open, just slightly, and a long rope ladder dropped onto the ground.

Trudie had the oddest feeling that the house was staring directly at her and that the rope ladder was meant for her and her alone. Somehow, she was certain of it. It was an invitation inside.

It wasn’t every day that Trudie got invited into houses that floated high in the sky above her backyard, and sure was not going to turn the opportunity down. She wasn’t even sure that she could if she wanted to. She climbed out of bed and hurried down the stairs and into the backyard, still in her pajamas.

Eagerly, she climbed up the rope ladder. It was high, higher than she had even been before other than that one time she had flown in an airplane to visit her cousins in California, but Trudie felt an odd flash of courage as she climbed the rope. As she climbed, she had never been so sure of anything than she was sure that she was meant to climb this rope ladder, and that she would make it to the top and still be alright.

Eventually Trudie did make it to the top and she collapsed on the doormat outside, panting. Once she caught her breath, Trudie stood up on her feet and knocked on the door.

She waited for some time, then knocked again. After still no one came to the door, Trudy pushed it open and let herself in. After all, she had already been invited inside. She was sure of it.

Trudie walked into a cozy, very blue living room. A fluffy blue carpet lay on the floor and the walls were adorned with a blue and white streaked wallpaper. Old wooden furniture was scattered throughout the living room. The room had an archaic feeling, like it was trapped in another time. That was far from the strangest thing about the room, however.

The strangest thing about the room was the spoons.

Spoons of all shapes and sizes cluttered the entire living room. They clung to the striped wallpaper, mounted in place. They littered the tops of the wooden tables and drawers, yet seemed carefully, even delicately arranged.

Trudie took a couple tentative steps into the home. The spoons all seemed to stare at her, but she paid them no mind. She was still glowing in the surge of valor she felt climbing the rope ladder, and felt as if nothing could scare her now.

“Hello?” called Trudie as she wandered into the home with a childish confidence that no grown adult would dare to possess.

“Hello?” she called again as she turned the big brass knob on a blue painted wooden door and walked through.

“Hello,” replied an old man from behind a workbench in the new room which, like the living room, was crowded with various spoons.

The old man applied the finishing touches to the chrome plating on a large soup spoon. Appearing satisfied with his work, the old man placed the spoon back down and rose on ancient legs to great Trudie.

“Finished just in time,” he said to himself. The old man then directed his attention to Trudy.

“What’s your name, child?” he asked, smiling kindly. He reminded Trudie of Mr. King, the friendly neighborhood piano teacher she saw on Tuesdays after school.

“You can call me Mr. Spoon,” he answered.

Mr. Spoon was very hunched over, with a curved old man spine. He wore a loose fitting suit made of olive green tweed, out which dangled a golden pocket watch on a chain. The look was completed by a white handlebar mustache and a bright pink bowtie.

“Do you live here?” she asked.

“You sure do have a lot of spoons.”

“I have one for every child that’s ever visited me here,” said Mr. Spoon, proudly.

“It is. I am a very old man, older than I look if I may say so. Children have been coming to visit my home for a very long time now.”

Trudie frowned as a new thought crossed her mind.

“Was I supposed to bring you a spoon?” she asked. “I could climb back down and get you one. We keep a whole bunch in the drawer next to the sink.”

“My my, no” said Mr. Spoon, gesturing to his workbench. “We’re going to make the spoon together.”

“It sure is,” agreed Mr. Spoon. “Now hold out your arm.” Trudie did as told while Mr. Spoon rummaged through one of the drawers in workshop.

“Why?” she asked, without lowering her arm. She was genuinely curious.

“I have to make the spoon out of something,” said Mr. Spoon cheerily emerging from the workbench holding a pair of viciously sharp, strange looking tools.

Hope and Stuart never did see their daughter again, but in the morning Mr. Spoon had shiny new chrome plated spoon on display. He mounted this one on a vacant spot he found on his bedroom wall.

Soon after Mr. Spoon found the right spot for his newest spoon, Trudy’s friend Timmy from down the street nearly choked on a mouthful of waffles at the breakfast table.

“Mom look!” he said, pointing out the window. “There’s a house just floating up there, in the sky.”

Timmy’s mother leaned forward and peered out the window, following where her son pointed.

“Timmy, there’s nothing out there. You really getting too old to be playing these sorts of games with me,” she scolded. 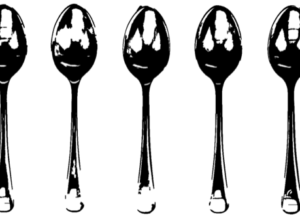