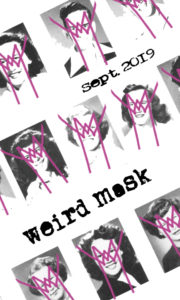 I was with a good friend of mine, let’s call him George, and it was Halloween night. We had just pulled up to a mutual acquaintance’s house after having left the downtown district of McAllen, TX. A few other friends of mine were winding down and a few of their friends were amped to meet us. Both sides heard stories about the other and it was just time to see what all the fuss was about, but George and I (he shirtless under his vest going as a Chippendales dancer and I wearing a leather jacket going as a generic greaser) absolutely needed to take a second after pulling up to partake in some white delight – we were young and fucking stupid as most men are at that age (early twenties). It was a beautiful night. The breeze could be felt even in the car with the windows down.

After I had taken two ill advised bumps, George held out his rusty key, whimsically shoveling it into the baggy, and began to float it toward his already raw nostril. The both of us were overflowed with liquor – he was on the driver’s side and I was a passenger in my own car – still able to notice that a silver vehicle had pulled up beside us, letting someone out to rush to the opposite side. Another shadowy figure jumped out. The door slammed shut.

The rest of what happened here occurred within a matter of minutes, no more than five.

George felt a terrible force smash against the side of his face. He still held onto the baggie. Weightless and disappointed, he turned to the passenger side to see the door wide open. “Oh,” he said. Later he told me his side of it all, thinking that I had ran off to get away. George slowly set the baggie down near the gas peddle, taking a few more consecutive punches from the two punks hovering around his door. They wouldn’t let him out. He never did get a bump for his efforts. The key to the car was on the ground, too. He wasn’t thinking he could roll the window up by putting the key into the ignition.

Whenever I saw George get hit the first time, I popped the door open and hastily threw off the leather jacket so that I’d have better maneuverability. I was in the zone, I thought. Sidestepping over to the front of the car, the headlights spotlighting my entrance into the ring, the two squirrely fucks looked at each other in their nonexistent souls and decided for some reason that the guy with the gun – a gun? Oh, shit, I thought. – was going to challenge me to a duel. The boy with the knife stayed behind to beat on my friend.

Later, this whole time George was tellin’ me that he kept trying to get out to fight like he was thinkin’ that they wanted to, but every time the punks would push the door shut and he would get another sucker punch to the noggin with the gun or with the butt of the knife, so what the fuck, he told me.

I don’t know if it was the adrenaline or if it was something else, but my brain was diving through all different kinds of scenarios to make sense of a dude charging at me with the gun when they both passed me over earlier and went after George. My dumbass had a eureka moment: It’s not a real gun, I thought in the midst of approaching this rat-faced child. I cycled through multiple emotions: disbelief, consideration, maybe I’m wrong, but as I paused to read his body language, I thought, well, shucks, maybe I’m right. Smiling with a fierce kindness, shining every which way, revealing all but the gunman’s face which was covered by the night’s sky. The kid was skinnier than me – which is crazy if you know what I look like – and was definitely younger. No doubt in my mind at this point, so I swung my left into his face. I connected! BOOM! I chuckled, glancing away to George and back. I couldn’t bare to look at my helpless brother for more than a second.

It just so happened that the gunman was quick and remarkable enough to smack me across the top of my skull with that stupid hunk of metal. “Ahh,” I remember saying. Now, obviously, I was drunk and then some, so I kept goin’. Ridiculously, shamefully, et cetera, the fight ended up on the gravel of the road. When he fell, the gun flew up in the air and I dove for it. Well, this cat had moves. He leapt up from the tar and grabbed onto my foot, bringing all my weight back down on top of me and him. We went back and forth, somehow hoping that one of us can get to the gun before the other until I attempted to pull him back by grabbing his shirt, which of course ripped, allowing his slimy self to gain the utmost advantage to this whole God forsaken ordeal.

This is when the rest of the party at our mutual acquaintance’s house cured their apparent blindness, drunkenly crowding around from the garage and into the driveway over-looking the street. The gunman turned around with a small interjection, aiming the barrel toward a whole crew of old school gangsters and crazy bastards before calling to his boy. That same car pulled up again. I don’t even remember it driving away earlier. The gunman jumped toward the backseat of the passenger side, where luckily I caught his leg, causing him to stumble. I gained momentum as he opened the door, pulling him out, relentlessly and out of desperation, he kicked me across the face like a cornered little no good baby. I released a little tension by repeatedly slamming the door over his leg, it hanging out of the car, until the car peeled out.

My car was empty. Keys still inside. “Where the fuck is George?”

“Hey, bro,” said one of the party guests. “He went that way.” Pointing down the street to George already halfway down to the exit of the neighborhood where he was now running back toward us with a joyful steam exuding from his eagerness to pursue the faceless villains of this story.

He ran passed me, Supermaned into my car, about to take off. I jumped in front. “Nah, I’m going with,” I said to a man with eyes like a demon. Running to my side of the car, he started to take off. After a few heavy knocks to the windshield, George unlocked the door and let me in. Hi ho silver, away!

We drove around for a while and lost our patience with it all, so we drove back to the party and continued our night of debauchery. One of our friends was a physical therapist and he thought George had a concussion. I may have had one, too. Falling asleep that morning wasn’t really difficult, even if we were told to fight it, we couldn’t.

Best part about it all besides not ever, after a handful of years, never discovering what the hell that was all about? Before we recklessly drove to the apartment, I had found a spring loader deal under the driver side of the car – of course I was driving if George was bleeding from his head, barely able to keep his eyes open – meaning that it really was a fake gun. And all night I had thought I must’ve had a death wish to run up on that kid. Still, maybe I did.

What exactly did we do to deserve that, huh? Suppose I’ll never really know.